Hits (and Misses) From the Presidential Inaugural Address 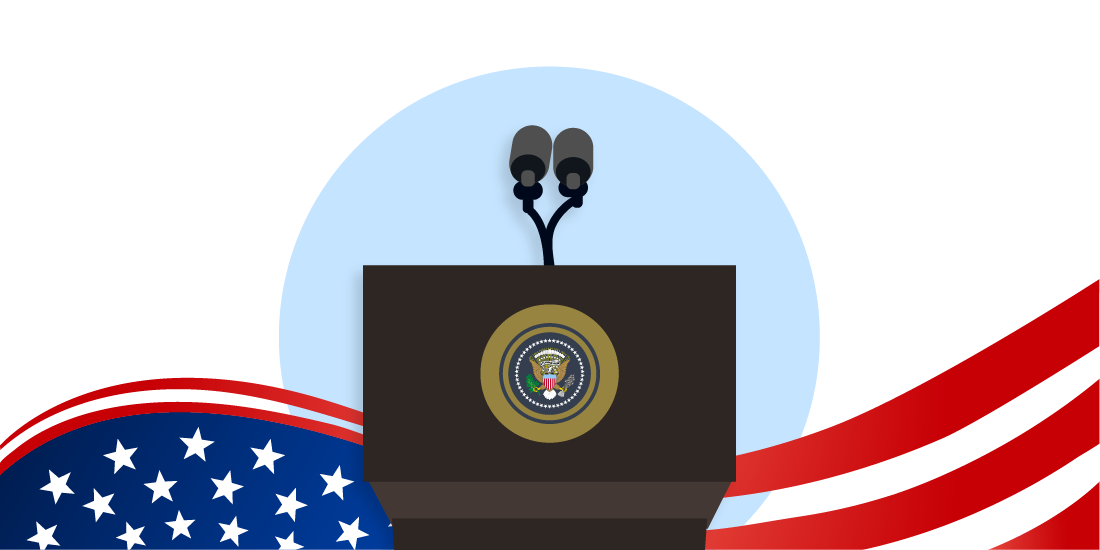 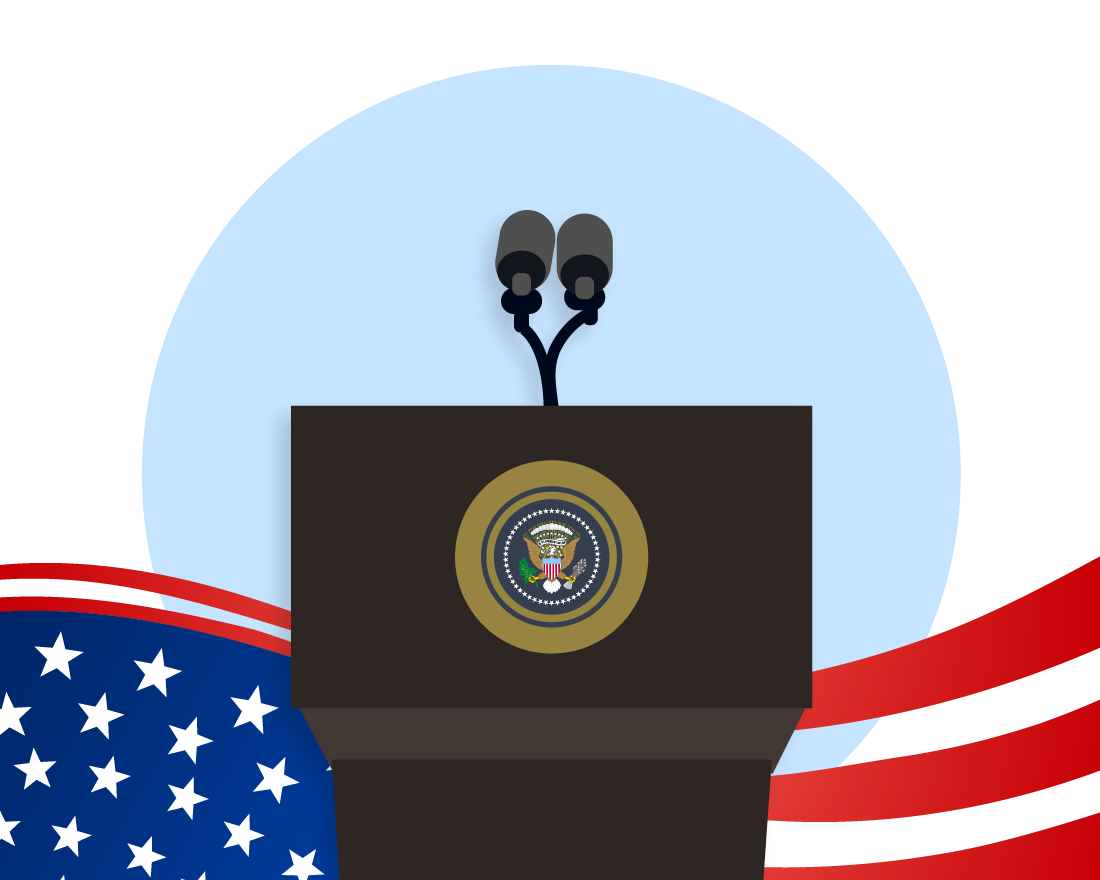 “I ask every American to join me in this cause, uniting to fight the common foes we face: Anger, resentment, hatred. Extremism, lawlessness, violence. Disease, joblessness, hopelessness." - President Joe Biden
Tweet

Plenty was on the line when President Joe Biden took to the podium following his Jan. 6 oath of office. With his inaugural address, Biden would set the tone for the start of his presidency, while also clearly marking a division from politics of the past four years.

The new president also had some pretty hefty shoulders to stand upon, as his address would undoubtedly be compared to still famous oratories by favored names like Kennedy, Roosevelt and Lincoln.

Delivering the perfect inaugural address was always going to be a challenge for Biden, who faces the challenge of a lifelong stutter. For years, Biden has been known to make verbal gaffes and trip over his own tongue— a characteristic that opponents were quick to attack, falsely attributing language missteps to intellectual inferiority or dementia. While a few points of the Jan. 6 speech alluded to an underlying stutter, for the most part Biden’s delivery was lauded – especially by the speech pathology community.

As Biden looked across the National Mall, he gave what has been called the perfect speech for the present time, an inaugural address that even political critics praised for its relevance and sincerity. Throughout the 20 minutes he spoke, Biden emphasized the unity that has been sorely lacking in the nation for some time.

"Recent weeks and months have taught us a painful lesson," Biden said in the address to not only Americans but the entire world. "There is truth and there are lies. Lies told for power and for profit. And each of us has a duty and a responsibility, as citizens, as Americans, and especially as leaders, leaders who have pledged to honor our Constitution and protect our nation, to defend the truth and defeat the lies."

Like any speech, Biden’s inaugural address hit plenty of highs, but it also left room for improvement. We took the chance to dissect Biden’s first speech as President of the United States, and we’ve highlighted some hits and misses below:

What Biden Got Right

1. Be your authentic self

In the current political environment, people on all sides of the spectrum are quick to spot an insincere politician. To reach his audience of millions, Biden had to be his authentic self. Did the essence of his speech reflect who he is as a person?

If Biden had delivered a speech written by Barack Obama or Martin Luther King, Jr. or John F. Kennedy, no matter how skillful his delivery, he wouldn’t have been believable. And if he isn’t believable, nobody is going to buy what he’s selling.

Biden isn’t known as an eloquent speaker, so the plain language and “folksy tone” he used in his inaugural address reflects that. Rather than some fancy, creative presentation maker, he sounded like himself.

2. Focus on a central theme

Political speeches often cover so many topics, they easily take tangential paths and veer off course. A strong speech will focus on a central theme that ties together every talking point. The theme of Biden’s inaugural address couldn’t have been any clearer: unity in democracy. Throughout the speech in which he pledged to be a president for all Americans, Biden repeated

his call for a unified America. In fact, Biden’s most used words not only included, “unity” and “democracy,” but he also chose the word, “all,” 24 times, the most use of a single word by any president in their inaugural address.

In parts of his address, Biden used the word “unity” in nearly every sentence. As he then focused on each additional point, every challenge and every goal, Biden brought it back around to unity and democracy.

“To overcome these challenges— to restore the soul and to secure the future of America— requires more than words,” Biden said. “It requires that most elusive of things in a democracy: Unity.”

An effective public speaker must also paint a realistic picture for the audience. The presentation maker must not only demonstrate an understanding of the realities audience members face, but also display true empathy for their pain, fears and uncertainty.

Biden’s inaugural address demonstrated a true understanding of a future that looks bleak to so many, one that includes an uncontrolled pandemic, countless deaths and a country on the verge of economic collapse.

“We face an attack on democracy and on truth,” Biden said in his speech. “A raging virus. Growing inequity. The sting of systemic racism. A climate in crisis.”

But Biden didn’t only address the many crises facing American in 2021, he also painted a picture of a unified nation that can overcome any obstacle.

“Few people in our nation’s history have been more challenged or found a time more challenging or difficult than the time we’re in now,” Biden said in his inaugural address. “A once-in-a-century virus that silently stalks the country. It’s taken as many lives in one year as America lost in all of World War II. Millions of jobs have been lost. Hundreds of thousands of businesses closed. A cry for racial justice, some 400 years in the making, moves us. The dream of justice for all will be deferred no longer.”

Addressing an entire audience can be a challenge, especially when that entire audience is composed of hundreds of millions of people. Regardless, an effective public speaker or presentation maker must rise to this challenge and in one way or another reach out to everyone.

While some have criticized Biden’s speech, suggesting that it placed blame for the country’s division squarely on conservatives, his words told a different story. Biden made a point of reaching out to all Americans, to include everyone in the nation’s recovery.

“I ask every American to join me in this cause,” Biden asked. “Uniting to fight the common foes we face: Anger, resentment, hatred. Extremism, lawlessness, violence. Disease, joblessness, hopelessness.

“With unity we can do great things. Important things. We can right wrongs. We can put people to work in good jobs. We can teach our children in safe schools. We can overcome this deadly virus.”

How Biden Could Improve

As much as Biden was praised for his common themes of unity and democracy, , he was criticized for not addressing specific objectives in his inaugural address. Not only his campaign but his entire party has long been accused of trying to deny liberties, and some felt he didn’t do enough to qualm those threats during his speech.

Others critics felt he simply didn’t address specific policy goals, instead focusing on a general return to American ideals. Biden could have avoided that criticism by referencing more specific policies he plans to implement.

“To all those who did not support us, let me say this: Hear me out as we move forward. Take a measure of me and my heart,” Biden said to his critics. “And if you still disagree, so be it. That’s democracy. That’s America. The right to dissent peaceably, within the guardrails of our Republic, is perhaps our nation’s greatest strength.”

Sometimes being true to one’s authentic self can backfire. In order to reach the most Americans, Biden had to carefully choose language that wasn’t divisive, and one of the more divisive topics in the United States is religion.

It wouldn’t have been authentic for the devoutly Catholic Biden to avoid any mention of religion, prayer or faith. But by specifically referencing the Catholic Saint Augustine, Biden could have alienated certain protestant Christian denominations who don’t believe in sainthood and who are already wary of the nation’s second Catholic president.

“Many centuries ago, Saint Augustine, a saint of my church, wrote that a people was a multitude defined by the common objects of their love,” Biden said.

Instead, it might be safer for Biden or any national presentation maker to use more general references to religion.

Obviously the most effective public speeches of all time are also the most memorable. After all, words that continue to resound over time are only logically going to have a greater impact on more people.

How memorable was Biden’s inaugural address? While it was called the perfect speech for the present time, and it likely will be remembered a success as a whole, Biden’s address will unlikely become iconic like the inaugural addresses of Kennedy, Roosevelt or Lincoln, partially because it lacked a catchphrase that will ring true for generations.

While his reference to an “uncivil war” will likely enter our American lexicon, there was no standout, “Ask not what your country can do for you,” or “the only thing we have to fear is fear itself” moment in Biden’s inaugural speech.

A Case Study: A Small Business Grows With the Help of High-Quality Marketing Materials