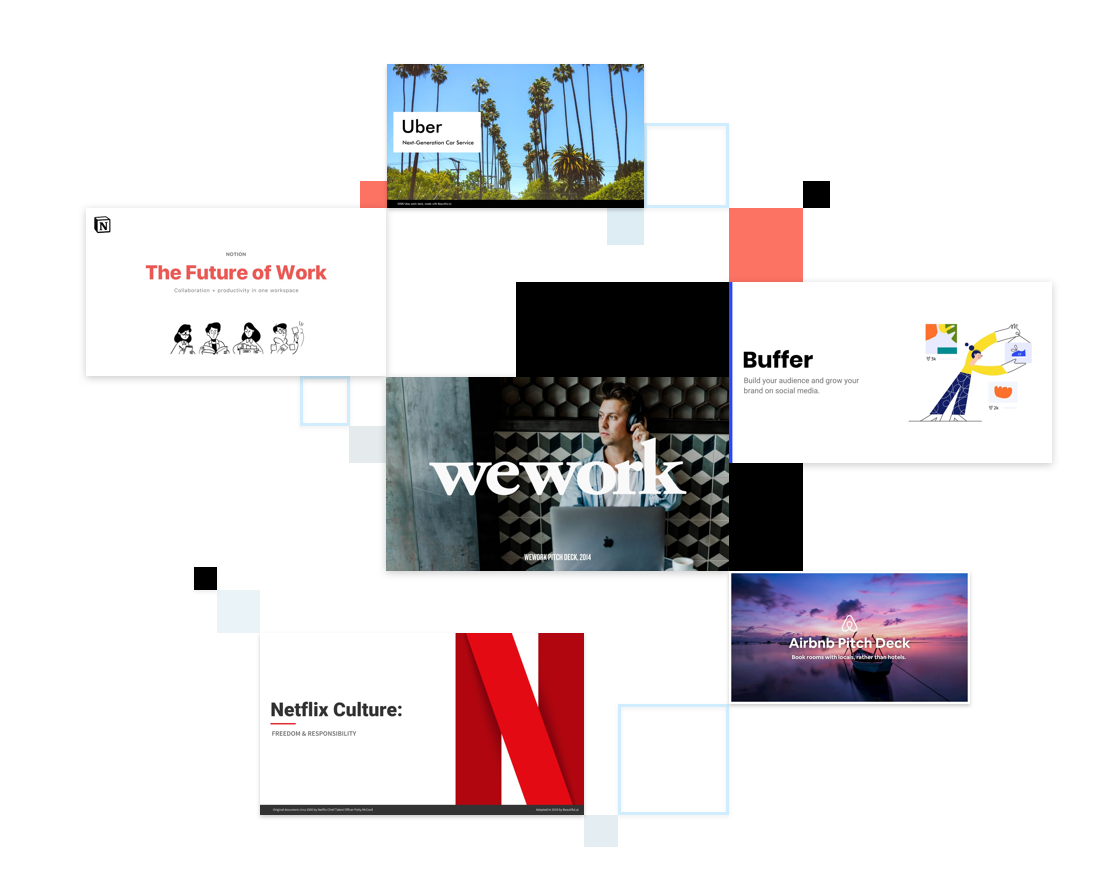 Regardless of the industry, every start-up requires funding to get the company off of the ground. Yes, even household brands like Netflix, Airbnb, and Uber started from the bottom (after all, money doesn’t grow on trees). In order to secure the funds they needed to scale their business, they had to create pitch decks to present their idea(s) to prospective investors. And we hate to be the bearer of bad news, but you’ll presumably have to do the same if you want to keep the lights on in the first year.

If you don’t know where to start, you’re not alone. Even the most successful business owners have had to present a new pitch deck at some point in their career (and we’d bet they were shaking in their boots, too). Luckily, some of said businesses’ most iconic pitch decks have surfaced on the web, and they’re a great source to pull inspiration from to kick off your own. That said, most of these pitch decks were created nearly a decade ago, and what looked good then most certainly does not look good now. So, we’ve taken decks from top brands like Uber, Buffer, WeWork, and even Canva, and gave their dated PowerPoint presentations a makeover to make them more beautiful.

If you missed our series of famous PowerPoint makeovers, here is a round up of some of our favorites to date.

Unless you’ve been living under a rock, you’ve likely seen or taken an Uber. The transportation company is wildly successful, but none of that happened without capital. In 2008 Uber made the first major step toward its road to success with $1.25 million in seed funding from investors including Napster co-founder Shawn Fanning, First Round Capital and others. Like many start-ups, they relied heavily on a presentation and strong pitch deck to do so. Sure, it got the job done, but their original pitch deck was a snooze and we couldn’t help but redo it. Learn more about Uber and the company’s initial pitch deck here.

Even with an attractive business plan and lots of initial traction, travel startup Airbnb still had to pitch their company to potential investors to allow for expansion. It’s a good thing their idea was a homerun, because Airbnb’s original pitch deck wasn’t. The 2009 presentation landed them $600,000 in seed funds from Alfred Lin of Sequoia Capital, Jeff Jordan at Andreessen Horowitz and Brian Singerman of Founders Fund. Even with its basic pitch deck, Airbnb skyrocketed from 1,000 customers in 2009 to more than 1.8 million listings across 34 global cities in 2015. Out of curiosity, we had to see what their presentation would look like in Beautiful.ai—and we have to admit, it looks good. Learn more about Airbnb’s pitch deck and the Beautiful.ai makeover here.

In late 2014 WeWork, the shared workspace company, raised $355 million in venture funding from investors including Goldman Sachs, Wellington Management and JP Morgan Chase. WeWork boasted 55 locations by 2015, a number that doubled in 2016 before reaching 178 locations – 10 million square feet of office space – in 56 cities across 18 countries in 2017. Impressive numbers under anyone’s standards, which is more than we can say about their presentation. Their original pitch deck was aggressively thorough, but the design left room for improvement. So, we took a stab at it. Check out the original WeWork Pitch Deck and the full makeover in Beautiful.ai here.

After the successful soft launch of a bare-bones app, Joel Gascoigne and fellow co-founder Leo Wildrich needed capital to establish their brand. The original Buffer pitch deck was effective in 2011— it helped the social media management platform raise $450,000 in seed money— but it wasn’t a slam dunk. The co-founders took about 150 meetings with investors who turned them down almost 90 percent of the time. With a then-unestablished brand, they needed one heck of a presentation to raise the kind of backing needed to ultimately hit 1 million users by 2013. Eventually, their pitch deck paid off (literally), but we gave it a Beautiful.ai makeover to show its true potential. Learn more about the makeover, and the original deck, here.

In 2009 Netflix released the now-famous 125-slide presentation on company culture created by Patty McCord, Netflix’s Chief Talent Officer at that time. The original presentation spelled out what it means to be a part of the team at Netflix, and a lot of businesses looked to that deck for inspiration for their own company’s culture. If you made it to the end (did we mention how long it was?) you know that the presentation warranted a more modern redesign. We consolidated the original deck in Beautiful.ai, because no one has time for 125 slides. Learn more about the original deck and makeover here.

How to Tackle Template Management Across Multiple Internal Teams and Assets