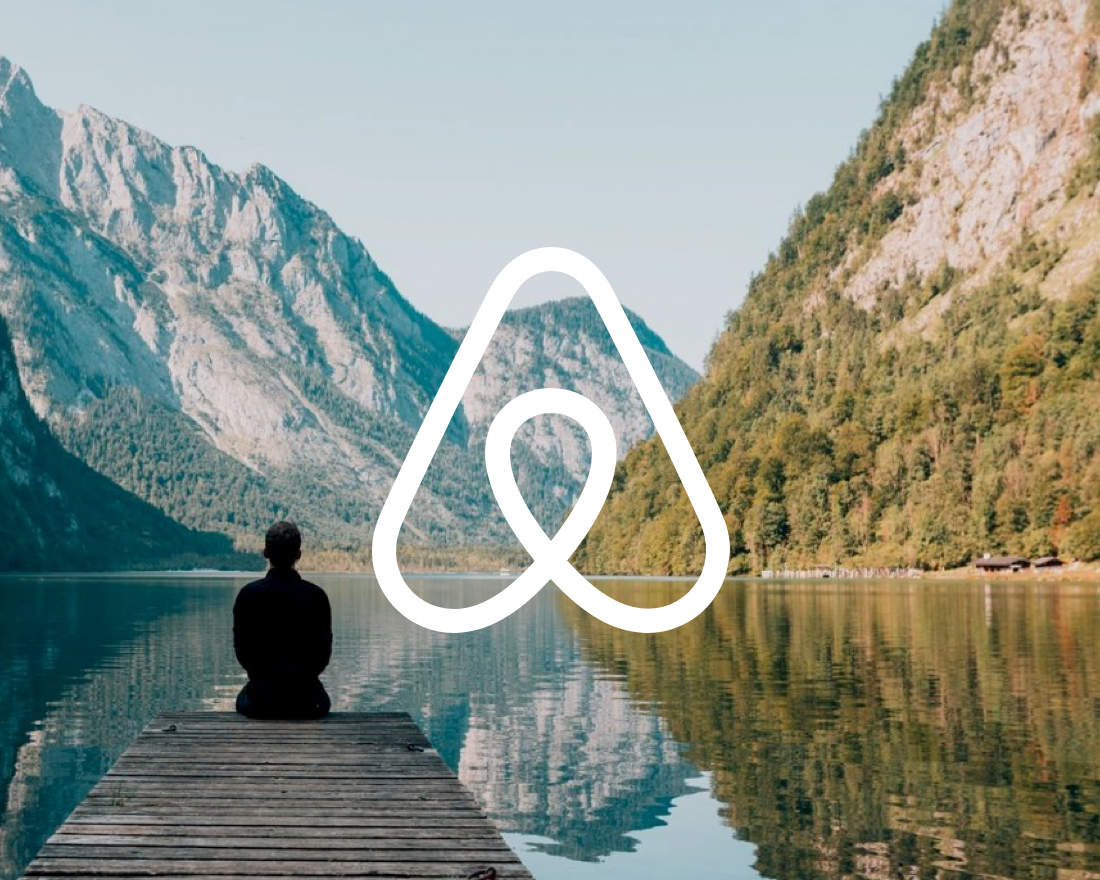 Launched in 2008, Airbnb got off to a slow and rocky start. Founders Joe Gebbia and Brian Chesky started offering their own home as a bed and breakfast to earn extra money for rent. A design conference was going to be attracting a lot of visitors to San Francisco, and the roommates rented out air mattresses on the floor of their apartment. Soon after, Nate Blecharcyzk joined as chief technology officer, and the three men developed a website named airbedandbreakfast.com. They sold presidential-themed breakfast cereal—yes, Cap’n McCains and Obama O’s—to finance the project. That initial nest egg ended up amounting to about $30,000 in startup capital.

‍Click to Customize this Airbnb Pitch Deck Template for Free

After testing at least three separate variations of the product, the Airbnb co-founders finally devised a recipe for success. Rather than copying popular travel sites like Travelocity and Expedia, which act as booking agents for commercial hotels and resorts, Airbnb offers someone’s home as lodging. Whether backpacking through Europe or planning an extended business trip in New York City, users can find a place to crash on Airbnb. Plus, as part of the “sharing economy,” homeowners can rent out extra space by hosting guests through Airbnb.

Airbnb doesn’t own any properties. Instead, it connects those looking to rent out space with those looking for space to rent. Free to use, Airbnb charges a guest service fee in addition to the cost of the room—usually between 6 and 12 percent. The service also earns a service fee of about 3 percent from its hosts. Therefore, its rates are generally far more competitive than traditional hotels.

In New York City, for example, the average Airbnb rate is $100 less than the average cost to book rooms at a local hotel. Sometimes, a room in certain suburbs can be rented for as little as $20 a night! In fact, when Forbes analyzed the rates in eight cities around the globe, it found Airbnb’s rates were lower in each one, and prices averaged $68 less than at hotels. The platform not only offered an easy way to save money for travelers, it was also an easy way for hosts to make money. And the simple, intuitive UX of the first website also allowed users to review listings from exciting destinations the world over from the comfort of their home—greatly minimizing the pain, lack of trust, and stress that often accompanies travel planning.

Click to Customize this Airbnb Pitch Deck Template for Free

“There were competitors but the product was a little different,” Leigh Gallagher, author of The Airbnb Story, told Digital Trends. “They really popularized sharing the space with somebody who was there. That made it more of a community; because you had a lot of interaction with the person you were hosting or staying with, it made it a more personal experience. They also took a cut of the transactions, which was one way they were able to really boost the business model.”

Of course, to really boost the company to success quickly, the founding team needed to raise money for further development and expansion. The co-founders found that in venture capital investor Paul Graham, who saw great potential in the fledgling business. It relaunched as Airbnb in 2009, a time catered to the company’s success. (If you really want to nerd out, read this decade-old article, when AirBnb was still involved a startup incubator called Y Combinator.)

“The great recession made it so people were looking for a cheap way to travel or a cheap way to make money from their homes,” Gallagher explained. “They also had this brand-new audience, a very large one, in the millennial generation—these were people still unclaimed by the hotel industry. They had different tastes: anti-corporate, counter-cultural, and they liked adventures and anything artisanal so Airbnb really spoke to them at a critical moment.”

Before / After: The Original Airbnb Pitch Deck

Even with a unique and attractive business plan, the Airbnb founders had to pitch their company to potential investors. And it’s a good thing their idea was stellar, because the original Airbnb PowerPoint presentation left plenty to be desired. That investor pitch deck—not an impressive visual document by any means—ended up scoring Airbnb $600,000 in seed funds. The three investors at those firms—Alfred Lin of Sequoia Capital, Jeff Jordan at Andreessen Horowitz and Brian Singerman of Founders Fund—will be rewarded handsomely when the company goes public sometime next year.

Just imagine what Airbnb might have done with a professionally-designed presentation? Even with its amateurish pitch deck, Airbnb skyrocketed from 1,000 customers in 2009 to more than 1.8 million listings across 34 global cities in 2015. By 2018, the company was valued at more than $38 billion and employed over 3,000 full-time staff (according to their LinkedIn page). Over time, the site has evolved from a budget, couchsurfing brokerage to a world class "brand," with Airbnb Luxe as it's latest offering: a luxury-level collection of premium homes in the most exotic, beautiful places in the world. And both the demand from travelers, as well as new host incentives, contribute to Airbnb's impressive growth month over month. Pssst: For a constant feed of drool-worthy destinations, check out their social media page.‍

The original presentation, recovered from a 2011 talk by Blecharczyk, offers an effective summary of Airbnb’s vision and its market opportunity—all in 14 slides. That’s a lot of information in just a few slides.

Our pitch deck template expands on that presentation, as well as beautifies the entire thing with vivid images, information graphics, brand themes and eye-catching animations. At the same time, we were able to maintain the topics Airbnb used in its first startup pitch deck. After all, the original slide deck connected with investors and started the company on the superhighway to success (even with that first, bad tagline: "book rooms with locals, rather than hotels"...)‍

Think of the Title Page of your pitch deck as a book cover; it's important it look its best. There’s nothing wrong with Airbnb’s original Title Page, but it seems a little bland. Our version is a lot prettier—and more memorable. First, we inserted an image to represent the welcome message, which immediately draws more eyes to the screen. We also set up a common theme for the full pitch deck, so each slide automatically shares common fonts, colors and page design. Our PowerPoint alternative also makes is super simple to insert logos, which we did on the welcome slide. Just type a company name into our search engine, and instantly see a whole list of applicable logos from which to choose. Finally, we got rid of the "Welcome" text and page number, and placed the company description under the main text to act as a teaser of what's coming next.

Yes, Airbnb did a great job of defining the problem the company will solve in their early-stage pitch presentation. Our only critique is that the lack of personality leaves us wanting more. So we decided to highlight important words in our theme’s secondary color to give it a little punch.

After defining the problem, the next slide in Airbnb’s pitch deck described the three different solutions provided by the company. But that's a lot of information for a single slide. We spread this information across three slides, and added images and animations to what would otherwise be dull bullet points.

This slide in the Airbnb PowerPoint was pretty good as-is: clean, clear, concise. We emphasized the numerical information with a pop of color for brand consistency. If you're craving more visualization, Beautiful.ai offers a variety of free chart and diagram templates in order to graphically explain data.

Beautiful.ai’s smart templates offer all sorts of ways to illustrate data. In this case, we used doughnut charts to compare values describing Airbnb’s market size instead of having simple colored circles in varying sizes. Adding animations only enhances the presentation and draws viewers eyes to each element as it’s introduced.

Airbnb’s pitch deck did a decent job of describing the product and incorporated a series of screenshots to illustrate it. But again, an excess of information on a single slide leads to lost data among audiences. They simply won’t absorb it all before moving on to the next slide. We solved that issue by giving each "step" of the product experience its own slide: Search by Location, Review Listings and Book It!

In order to illustrate Airbnb’s business model, we used another of Beautiful.ai’s templates that illustrates a timeline or cause/effect relationship. The first two steps, of course, describe the elements of Airbnb’s earning strategy, culminating in the total revenue forecast. The animations fade in slowly, adding a fun interactive element.

So the original "Market Adoption" slide in the Airbnb pitch deck presentation is kind of a mess. So much information cluttered onto one slide. So many different fonts, logos, numbers.

Instead, we spread information from the following original slide detailing Airbnb's "go-to-market strategy" among three new ones: 1) The Craigslist "double posting" functionality, 2) National event destinations, and 3) Discount travel partnerships—each highlighting one important element of Airbnb’s adoption plan at a time.

Analyzing your competition is an important step, and the results are best communicated via an XY Plot template. The original Airbnb pitch deck featured each competitor's logo in different sizes, with a mix of transparent png formats and solid background logos. Not the most cohesive look.

Beautiful.ai's smart slide template plots the competitor "bubbles" equally across the grid automatically, so the slide design looks balanced. The XY Plot presentation template serves as a clear visual description of the competitive landscape in which Airbnb operates. It's even simple adding animations, so that each competitor company fades in one after the other, attracting more attention to each element as it appears.

The original "Competitive Advantages" slide in the Airbnb presentation listed 6 different reasons why Airbnb has a chance at dominating the travel industry, along with a description of each. What results is a lot of text on text on text. Instead, Beautiful.ai’s "Carousel" smart slide template lets us touch on one reason per slide with a colorful, corresponding icon. This smart slide template also leaves the "Competitive Advantages" header on the top of each slide—so it's easily understand that each point corresponds to that subtopic.

One slide the original Airbnb Pitch Deck didn't include that it should have? A "Meet the Team" slide! Which we feel is a pitch deck necessity; hence why we added it in. Beautiful.ai "Team" smart slide template highlights each member of the team equally, with room for headshots. You can also use this template to list advisors or board members as well, highlighting all key players involved.

Keep scrolling and you'll find a Press slide that lists some notable digital and print publications that wrote about Airbnb, as well as User Testimonials with choice pull quotes about their unique experiences with the platform.

Every good pitch deck should communicate where home base is; it gives important context as to company culture, time zones, potential taxes, et cetera. So we took the liberty of adding this slide as well. Insider Tip: If you are lucky enough to score a guest pass to the Airbnb headquarters in San Francisco, you're in for a real treat (one of which is all-you-can-drink Kombucha).

Did you like what we did there? The Airbnb PowerPoint is so pretty now! Click the link above to start customizing your Pitch Deck today. For additional resources, check out our step-by-step Business Plan guide and presentation template.

Jump Start Your Q1 Planning With These 10 Presentation Templates