The 2020 Election: Top Public Speaking Hits (and Misses) from the Presidential Debates 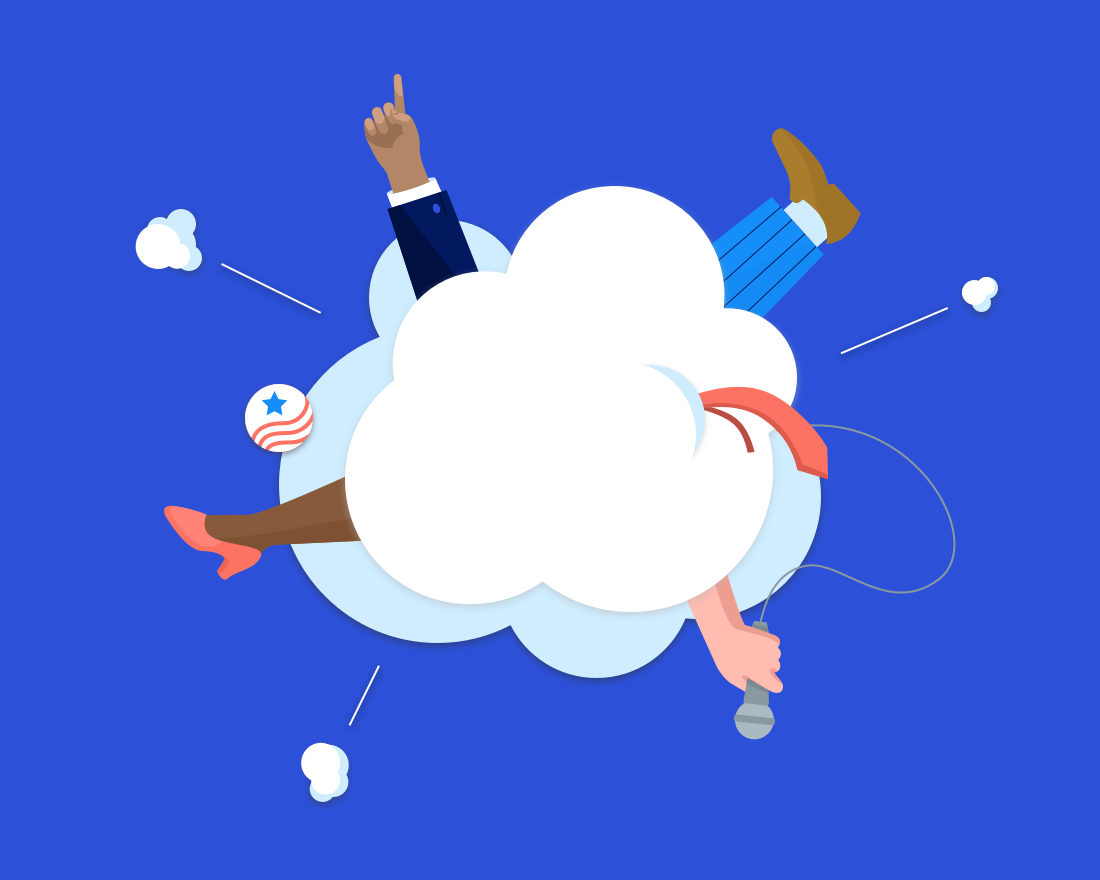 Millions of Americans tuned in to ABC on Sept. 12 to witness all the major 2020 Democratic presidential candidates debate one another on the same stage. But did they persuade voters? And if so, was it their platform or debating savvy that had the greatest impact on viewers?

Although the Houston event was the third for Democratic party candidates, the debate represented the first time all top contenders appeared together. The top 20 previously were split into smaller groups to debate on multiple nights. Only those candidates polling at a minimum of 2 percent and who boast at least 130,000 donors from at least 20 states—as well as at least 400 in every state—qualified for the latest round.

No matter what policies they support, modern-day presidential candidates must impress audiences with their communication skills. With so much of presidential campaign success or failure based on television appearances, a candidate who is a poor public speaker will have a challenging time reaching voters. In fact, a winning debate strategy must include a mastery of rhetoric—so much so that former Vice President Joe Biden’s campaign paid thousands of dollars to a public speaking firm following a less-than-stellar performance at the first Democratic primary debate.

What is rhetoric? Simply put, it’s the art of persuasion — kind of an important characteristic of a debating strategy. Rhetoric has been a vital element of democracy ever since the ancient Greeks invented each. But persuasion doesn’t mean instructing someone what to believe, rather it's convincing them why you’re right.

According to Plato, “Rhetoric is the art of ruling the minds of men.” Sound like politics? His pupil Aristotle called rhetoric the ability to identify the appropriate means of persuasion in a given situation — and he defined plenty of ways to accomplish just that.

Technically, there are three steps to use rhetoric in effective public speaking. First, the speaker must analyze the situation and context of the speech, including demographic factors for both the speaker and his or her audience, time, place and experiences with the subject at hand. An effective orator will gauge the audience’s emotions and design speech appropriately.

So, what are rhetorical tools? You might be surprised how many you use in your everyday speech without even knowing it. It’s really not so far fetched, since literally hundreds of different rhetorical techniques have been defined over the centuries. For example, when a speaker asks a question for dramatic effect then answers it himself, that rhetorical question is known as anthypophora.

Likewise, repeating similar words or phrases to emphasize a point—a strategy frequently employed by political candidates—is a form of rhetoric known as congery. When a politician gives a prepared speech and structures their argument with a series of key points supporting it—similar to a bulleted list in written text—he or she is employing the rhetorical tool known as eutrepismus.

Obviously, skilled political debaters will use a variety of rhetorical tools and display other public speaking skills, including controlling their facial expressions and body language, making eye contact with their audiences and understanding other forms of nonverbal communication. And of course, even the most experienced candidate will likely make a snafu or two during live events in front of an audience.

Still clearly the frontrunner in the Democratic primary race, Biden was strong out of the gate (14:32) following previous debate performances that left room for improvement in terms of public speaking savvy. The former vice president led his opening statement with a reference to President John F. Kennedy, an effective public speaker and an American icon who to many epitomizes a united nation. From there, Biden employed the rhetorical technique of eutrepismus to outline his platform, emphasizing key points of his campaign.

While Biden’s public speaking performance improved during the Houston debate, it was far from flawless. Biden lacked clarity in certain responses, as he rambled through a ton of information (50:13), trying to fit in almost too much information into the allotted time. He would start down one verbal path, only to grab ahold of a tangential point before meandering back to his original thought.

Likewise, Biden’s lack of focus doesn’t help a candidate who has been most heavily criticized for his age. Is his mind still sharp enough for Washington, D.C.?

Biden may have skillfully employed eutrepismus in his debate strategy, but Sanders mastered the technique. Every response the Vermont senator delivered was structured as the perfect outline, complete with bulleted points emphasized by Sander’s right hand. Whether he was presenting his overall platform or health care plan, discussing his record in the senate, or explaining just what democratic socialism means, Sander’s arguments were presented clearly and in logical order.

Of course, we can only control our natural voices to a certain extent, and this limit certainly impacts Sanders. It was obvious during this debate that his instrument was a tad tired, as his voice was more hoarse than its already normal gruffness. It’s easy to understand why Sander’s is often referred to as a grumpy old man. Fortunately, he cancelled a speaking event scheduled for the next day and gave his voice a needed rest.

The senator from Massachusetts continued her string of strong debate performances with another nearly flawless presentation. In her opening statement, Warren took her audience on a journey as she told the story of her early life and access to education. Once she had grabbed hold potential voters’ attention and created an emotional bond, she purveyed the story into support for her platform. Warren also skillfully maintained eye contact with not only the large audience in front of her, but the camera through which millions more were viewing her.

We intended to provide an example of something Warren got wrong during the third debate, but in all honesty her performance was flawless. Of all the candidates, she demonstrated the greatest mastery of rhetoric, so how about another clip of that, instead?

Asyndeton is an incredibly common rhetorical device that most of us use without even knowing it. When you deliberately omit conjunctions between successive clauses, the choppy and abrupt verbal creation energetically emphasizes an idea. Warren employs asyndeton frequently to drive home key points of her platform.

While all eyes might have been focused on the top three Democratic candidates, other performances stood out, as well, including:

Castro started the debate off strong with an opening statement in which he clearly connected with television audiences through eye contact. Obviously eye contact is critical in effective public speaking, but during a televised debate do you look at the moderators, your opponents, the audience or viewers at home? While other contenders looked at the camera, the San Antonio, Texas native effectively looked into the camera, connecting with potential voters at home.

Castro also continued to outshine many of his opponents with his frequent recitation of specific facts—a quality of increased importance in a world filled with cries of “fake news.”

While confrontations are to be expected during a debate, Castro was criticized for his snarky comments to Biden, and he even faced some allegations of ageism. Whether the quips boosted his image or harmed it is still up for debate.

Harris has been known for her powerful performances in the first two rounds of debate, and the former prosecuting attorney continued the trend in Houston. Her remarks were well-thought out, clear and to-the-point. But of anything, her opening statement stood out during the night. Rather than discussing herself, the California senator took the opportunity to speak directly to Donald Trump—and she didn’t hold anything back. Harris looked into the camera as if she were standing in front of the president… and if looks could kill, we'd now be talking about President Pence.

The former House of Representatives legislator from Texas pulled at potential voters’ heart strings as he almost candidly spoke of recent tragedies in his hometown of El Paso. Aside from political statements, O’Rourke has also consistently demonstrated his camaraderie with the Latino community with his Spanish fluency.

The Houston debate was no exception, and O’Rourke again addressed the Spanish-speaking audience directly in their native tongue. And while 42 percent of U.S. adults surveyed by YouGov said speaking Spanish during a televised debate was “pandering,” 46 percent of Democrats said it was respectful.

After having been relatively overlooked in the prior two debates, Yang wanted to get some attention. He succeeded by offering to pay 10 viewers $1,000 a month for a year as an example of his proposed universal basic income. But it was another point of the debate that Yang grabbed attention in an even more effective way—tugging at heartstrings. Yang told an emotional story of his father’s immigration to the United States, and the opportunities it allowed him as a first generation American.

A Case Study: A Wine Investment Company Uses Beautiful.ai To Tell Their Story